Applied social researchers at the University of Minnesota engage in a study that is designed to address maternal and child wellness in the Somali-American community. 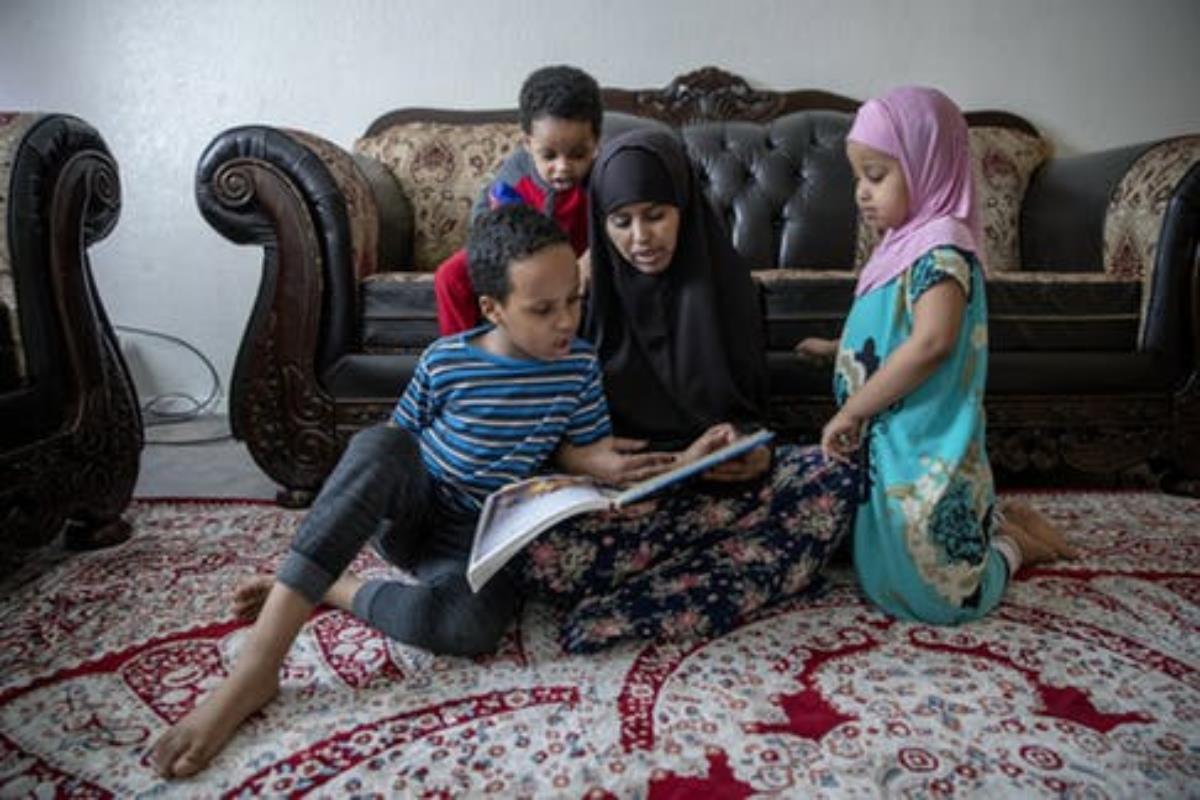 Fardowsa Bashir — mother of six children — said she has learned to read, cook healthy foods and be a better parent while participating in a University of Minnesota study.
Dozens of audios sent to several East African immigrant mothers referenced the protagonist from a Somali folk tale in a reminder about the challenges of parenting.
“As Igal Shidad traveled around for a good place for his family to live, he had challenges along his journey,” the messages said, describing the trek of a nomadic camel and sheep herder. “He found it helpful to keep his faith in Allah, because it helped him keep faith in himself. Keep your faith and you too can deal with your challenges.”
The university researchers’ study focuses on maternal and child wellness in the Somali-American community. Proponents of the effort believe that the system can be used to reach other populations that might struggle with written literature in English or adapting to different parenting norms in the U.S.—from basic nutrition recommendations to how to navigate the health care system.
Amy Susman-Stillman, lead researcher and director of applied research and training at the University of Minnesota’s Center for Early Education and Development, said other immigrant groups could stand to benefit from a similar process.

“Most parents seem to want to benefit from early childhood health and development [knowledge], it’s just that we know that some parents are less likely to be receiving that information or there are more gaps in what they receive,” Susman-Stillman said.

Fardowsa Bashir, 38, lives in Minneapolis with her six children. She raised her first child, who is now 16, in Kenya. She recalled a culture of freedom for children. But in the United States, Bashir said through a translator, she has more concerns.
Bashir’s family is originally from Somalia and migrated to the U.S. in 2011. “In America you have to constantly be aware of your children. In addition to their safety and their security, you have to worry about their homework, whether they’re staying out of trouble or behaving themselves appropriately, and on top of that you’re a working mother … you’re busy. There’s a lot going on here.”

In the study’s recently finished pilot phase, researchers sent audio files in Somali to the mobile phones of 50 Somali-American mothers three times a week for six months, working with health practitioners at People’s Center Clinics and Services. They decided against using standard written text messages, since not all participants could read in their own language.
Deborah Olson, a pediatric nurse practitioner involved in the University of Minnesota study, has seen many East African parents who cannot keep up with parenting advice in English, from books to blogs. Much of the advice in mainstream books and blogs does not consider large family sizes that are quite common in East African households, among other cultural differences.
Olson, who works at People’s Center Clinics and Services, shares, “I think in American culture a lot of times we take parenting classes and we have some time to devote for parenting education, but in this population that was unrealistic to expect that they would have those opportunities.”
Olson has found that in East Africa, parents typically took kids to the doctor only when they felt incredibly sick. Yet those raised in the American health care system are taught to place value on preventive, routine checkups. They are also accustomed to early vaccination and the use of over-the-counter medications are quite common for childhood illnesses.
“If you weren’t raised in the American health care system and your extended family is not necessarily available to you, then there’s just a big absence of information I think that most of us take for granted,” said Olson.
While messages play about maternal well-being, playing and reading with children, feeding them fruits and vegetables, and how to bring down a fever and call a nurse line phone number for sick children, Somali lullabies play in the background. These messages encouraged well-child visits at age-appropriate intervals to check development, keep up to date on vaccines and talk about car seats, bike helmets and other safety measures.
One message, referring to a Somalian folk tale figure, encouraged mothers to see a doctor if they feel sad, unmotivated and tired for more than a few weeks after having a baby. Another message focused on how to feed babies: “Do you want to introduce a new food to your baby? Give new foods in the morning, just in case your baby has any reaction to a new food. Then you can handle a problem during the day rather than at night and losing sleep.”
The University of Minnesota's applied research team’s messages helped Bashir intentionally serve more fruits and vegetables to her children instead of traditional high-carb foods. She also began to closely monitor her children’s fat and protein intake.
“Now that I’ve started bringing these new foods, the children really like them — especially the apples. If I bring it tonight, it’ll be gone by tomorrow.”

One mother interviewed by university researchers said that back in Somalia, she would have let her cry and finish what she was doing. After the study, she now believes it is important to soothe the baby first and clean later.
“It just gave another way to think about what it means to have a young child and how to support them and be the best parent you can be. That can look different in different places, especially if you’re coming from a war-torn country where you’ve had a different kind of life experience” said Susman-Stillman.
Olson said she wants to continue registering families to receive the message. She sees the possibilities to apply the program more broadly, to people who are pregnant or have diabetes, blood pressure or other chronic diseases. She would want to run the program in other languages too, such as Spanish and Oromo.
Olson is used to sending several pages of recommendations home with patients, but she added, “I’m sure a lot of that is just tossed, because you don’t read English or it’s a lot of information to sit down and look at when you’re trying to get dinner for six or eight kids.”
Are you interested in this type of university-level research? A bachelor’s degree, master’s degree, or doctoral degree (PhD) in some field related to social science or public health may be the key to you taking the next step in furthering your career. Keep in mind that there are several online learning options available for you as well. Several top colleges and universities in the United States offer various bachelor’s degree, master’s degree, and doctoral degree (PhD) programs in these fields through traditional, contact classes and online study/online learning programs. While working to earn your bachelor’s degree, master’s degree, or doctoral degree (PhD) in person or through online study/online learning programs, you can be exposed to top research methods in some of the best learning environments while surrounded by the top experts in your respective field of choice.
Still wondering if a bachelor’s degree, master’s degree, or doctoral degree (PhD) is right for you? Take a look at our website to see if you can find the best bachelor’s degree, master’s degree, or doctoral degree (PhD) program for you. Note that there are several programs offered fully online through online learning systems.