Former Pimco CEO Douglas Hodge left the federal courthouse in Boston after having pleaded guilty for paying to have his children admitted to universities as fake athletic recruits in the college admissions scandal. 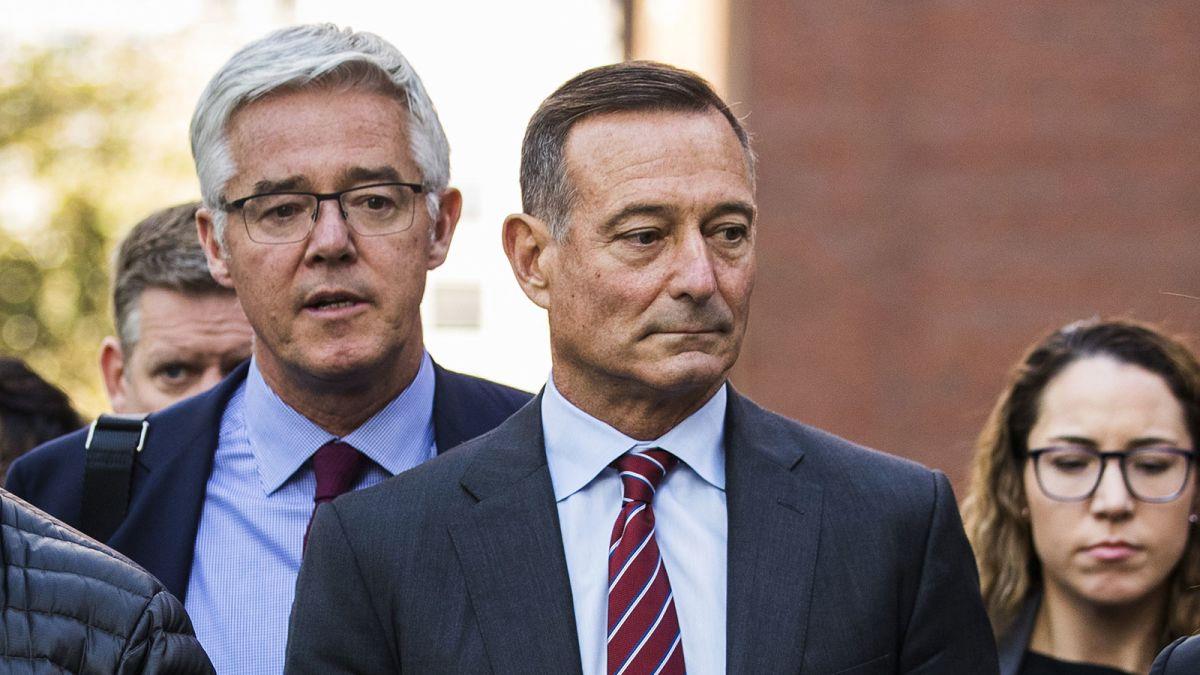 Douglas Hodge, the former leader of an international bond manager and now an admitted felon, was ordered Friday to spend nine months in federal prison for paying bribes that totaled to $850,000 to get four of his children into top bachelor’s degree programs the University of Southern California and Georgetown University as fake athletic recruits.

Hodge, 62, has officially received the longest prison term of any of the 14 parents who have so far been sentenced for fraud and money laundering crimes that were admittedly committed with William “Rick” Singer, a Newport Beach college admissions consultant who has acknowledged defrauding some of the country’s most selective top colleges and universities for years with rigged exams, fake athletic credentials and bribes. Singer was able to help students get into bachelor’s degree programs in some of the best colleges and universities.

U.S. District Judge Nathaniel M. Gorton also ordered Hodge to pay a $750,000 fine. He also sentenced Hodge to serve 500 hours of community service and remain on supervised release for two years.
Hodge shared in a statement, “I know that I unfairly, and ultimately illegally, tipped the scales in favor of my children over others, over the hopes and dreams of other parents, who had the same aspirations for their children as I did for mine. To those children, and their parents, I can only express my deepest and sincerest regret.” Hodge openly admitted to having paid to have his children enter into bachelor’s degree programs at some of the best colleges and universities.

Hodge, a Laguna Beach resident, has been one of the highest-profile names in this college admissions scandal since his surrender to authorities last March. He became head of Pimco, a bond management company based in Newport Beach, before retiring from the post of chief executive in 2016.
The U.S. attorney’s office’s prosecutors in Boston had asked Gorton to send Hodge to prison for at least two years. In a memo filed prior to sentencing, they criticized Hodge as a hypocrite, appearing to the world the image of success and integrity while leading “a secret double life, using bribery and fraud to fuel a mirage of success and accomplishment.”
Hodge’s lawyers said the request for a two-year prison term reflected the Boston prosecutors’ “single-minded obsession” with obtaining undeservedly lengthy sentences in the high-profile case. Gorton handed down in November what was previously the longest sentence in this case, a six-month term, to Toby Macfarlane. The Del Mar title insurance executive is incarcerated in Tucson scheduled to be released in June, according to Bureau of Prison records.

Hodge pleaded guilty in October to conspiring to commit fraud and money laundering. Along with three other parents, he quickly reversed his not-guilty plea after prosecutors warned of a new indictment carrying a bribery charge.
Eleven parents—a group that includes actress Lori Loughlin and her husband, J. Mossimo Giannulli—balked at the threat and maintained their not-guilty please. They were indicted on a bribery charge. Fifteen parents have pleaded not guilty and 21 have admitted guilt or said they plan to do so.
In court papers and a letter to the judge, Hodge described how he and Singer met. Over the next decade, Hodge become one of Singer’s most frequent and lucrative clients. As Hodge looked for a college counselor, his old friend—the same friend who had suggested he apply for a job at Pimco in 1978—recommended contacting Singer, as he was “the best possible mentor and guide.”
Singer helped Hodge’s oldest daughter apply for a bachelor’s degree program in Georgetown University. Admission was guaranteed. The application falsely described her as a competitive tennis player and two checks for $75,000 each that Hodge mailed to the home of Gordon Ernst, Georgetown’s tennis coach.
Hodge’s lawyers said only after Singer submitted the girl’s application did he disclose he’d revised her college admissions essay to include falsehoods about her tennis prowess. Hodge understood mailing personal checks to a coach “was not the standard process for a college donation,” but Singer explained it as a way to ensure only the tennis team got the money.
Hodge’s lawyers wrote, “Although Doug looked away from the aspects of Singer’s work that made him feel uncomfortable at the time, he now sees his actions in a stark light. He committed fraud, plain and simple.”
Justin D. O’Connell, an assistant U.S. attorney in Boston, said Hodge did more than look away from Singer’s scheme. Hodge “engaged in the scheme more often, and over a longer period of time, than any of the defendants charged to date.”

After his daughter was admitted to a bachelor’s degree program at Georgetown University, Hodge repeated the scam at the school for his oldest son at USC for two more children. He spent $850,000 in all. In arguing for a two-year sentence, O’Connell pointed to what he said was Hodge’s willingness to bring his children into his crimes.
Hodge told his daughter to “stay under the radar,” and not tell a Georgetown interviewer that she had already been admitted through tennis, O’Connell wrote.
Hodge vehemently disputed this claim. “The government simply has the facts wrong on this.” His lawyers said he took “great steps” to hide from his children the scheme to transform them into elite athletes on paper. Prosecutors have no evidence that his children were aware of, let alone complicit in, the fraud.